by Rhonda Schwinabart, host staff, based on material from previous releases by NPS and University of Richmond

In January 2021, the Bear Rocks and Allegheny Front Preserve became the 600th National Natural Landmark (NNL) of the United States, thanks in part to the research efforts Dr. Todd Lookingbill and Dr. Dave Kitchen of the University of Richmond and Dr. Katia Engelhardt of the University of Maryland Center for Environmental Science- Appalachian Laboratory. 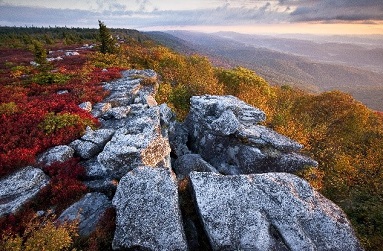 The Bear Rocks and Allegheny Front Preserve, an approximately 1200 acre area north of Dolly Sods, West Virginia, is owned and managed by The Nature Conservancy. The Preserve, formed through uplift from continental plate collisions and millions of years of ice, wind and water erosion, is home to one of the most recognizable geological features in West Virginia: magnificent sandstone outcroppings. Characterized by elevations of up to 4,000 feet, strong winds, cold temperatures and shallow soil, this unique ecosystem hosts meadows, bogs, and forests of hemlock and red spruce.  Because of this unique combination of factors, the region is also home to various plant and animal species, such as snowshoe hare, typically found in more northern, alpine regions. Bear Rocks also serves as an important flyway for migrating raptors.

Bear Rocks, NNLs and the CESU

In 2015, Lookingbill, Kitchen, and Engelhardt were asked by the National Park Service (NPS) to conduct a site survey to identify new NNLs. Established in 1962, the NNL program encourages the preservation of the best examples of biological and geological landscape features in the United States.  The program, administered through the NPS, includes both publicly and privately owned lands, and while an NNL designation does not make privately held land accessible to the public or restrict the land’s use, it does make assistance available for conservation efforts undertaken by owners.

Funded by the NPS through the Chesapeake Watershed Cooperative Ecosystem Studies Unit (CHWA CESU), the 2015 project evaluated and compared Bear Rocks with four (4) other identified sites based on number of criteria including the site’s rarity and value for science and education. Based on this evaluation, the Bear Rocks site was ultimately recommended for the NNL designation to NPS decision-makers

“The work completed at Bear Rocks represents the quintessential CESU project – research completed by several of our non-federal cooperators, working together, for the benefit of the American public and to help us better understand the natural and cultural resources we have around us,” said Dr. Dan Filer, CHWA CESU NPS Research Coordinator. “We are honored to celebrate this nomination as the 600th NNL in the program!”

Following a comment period in which no public concerns or objections were raised, the site was put forward to the National Park Service Advisory Board and the Secretary of the Interior for final approvals. The official designation took effect in January 2021.

Those interested in the program can learn more at https://www.nps.gov/subjects/nnlandmarks/index.htm