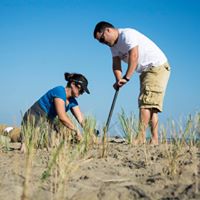 Coastal sand dunes are formed by the action of sea and wind. Materials carried by rivers is deposited with the help of the sea along the coastline forming sand dunes. These dunes protect the land by acting as a natural barrier to salt water intrusion and sea wind erosion. The sand dune system absorbs the energy of waves and without this protection soft coastline would disappear rapidly. Even small disruptions in the dune system can cause salt-water infiltration into the groundwater, threatening local farmlands. Although sand dunes may appear to be lifeless, they are home to a multitude of species, and they now are priority habitats for conservation.

Since 2006, the National Aquarium and the U.S. Department of the Navy (DoN) have conducted sand dune stabilization activities along installation beaches at Dam Neck Annex (DNA).  In addition to protecting natural and manmade environments from the ocean-related erosion described above, these dune systems play a key role in the Navy’s training mission. 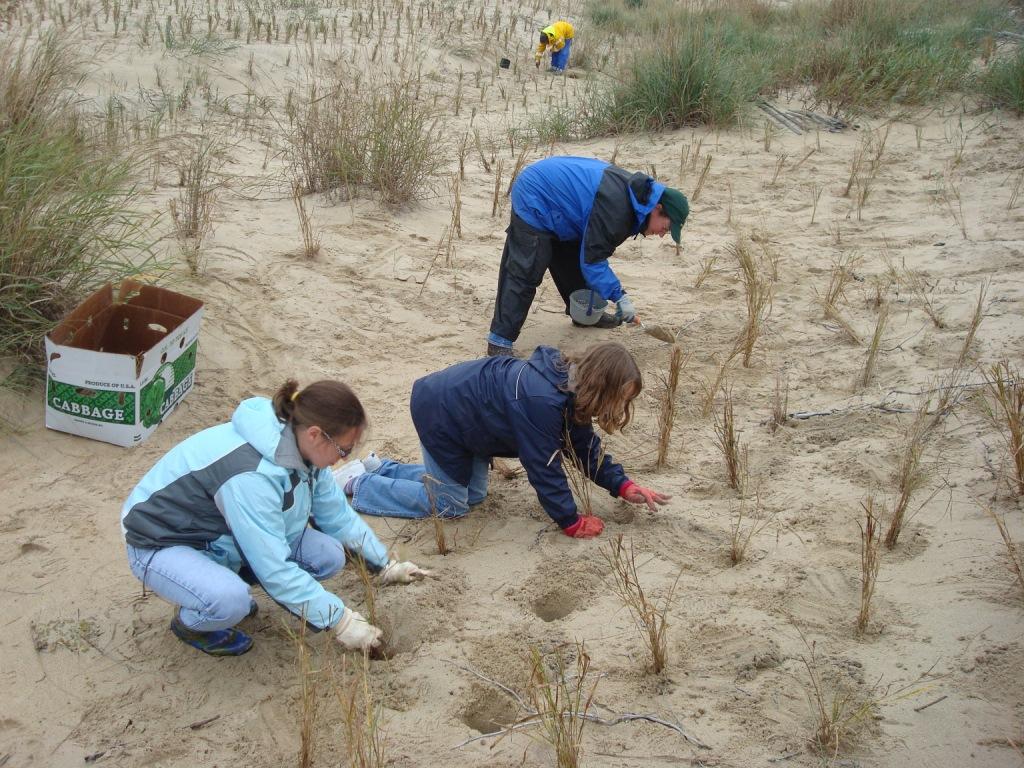 In 2018 the Aquarium and DoN entered into a cooperative agreement to plant vegetation along a portion of these dunes and install dune fencing with community involvement. This agreement aims for the Aquarium to:

The DoN, beyond providing baseline funding, supports project efforts in the following ways:

In the fall of 2018, the Natural Resources Manager at DNA worked with the Aquarium to identify a stretch of dune along the four-mile coast suited for  the fall stabilization effort. This area, adjacent to the Shifting Sands Club, is characterized by areas of barren sand drifts with limited plant diversity. 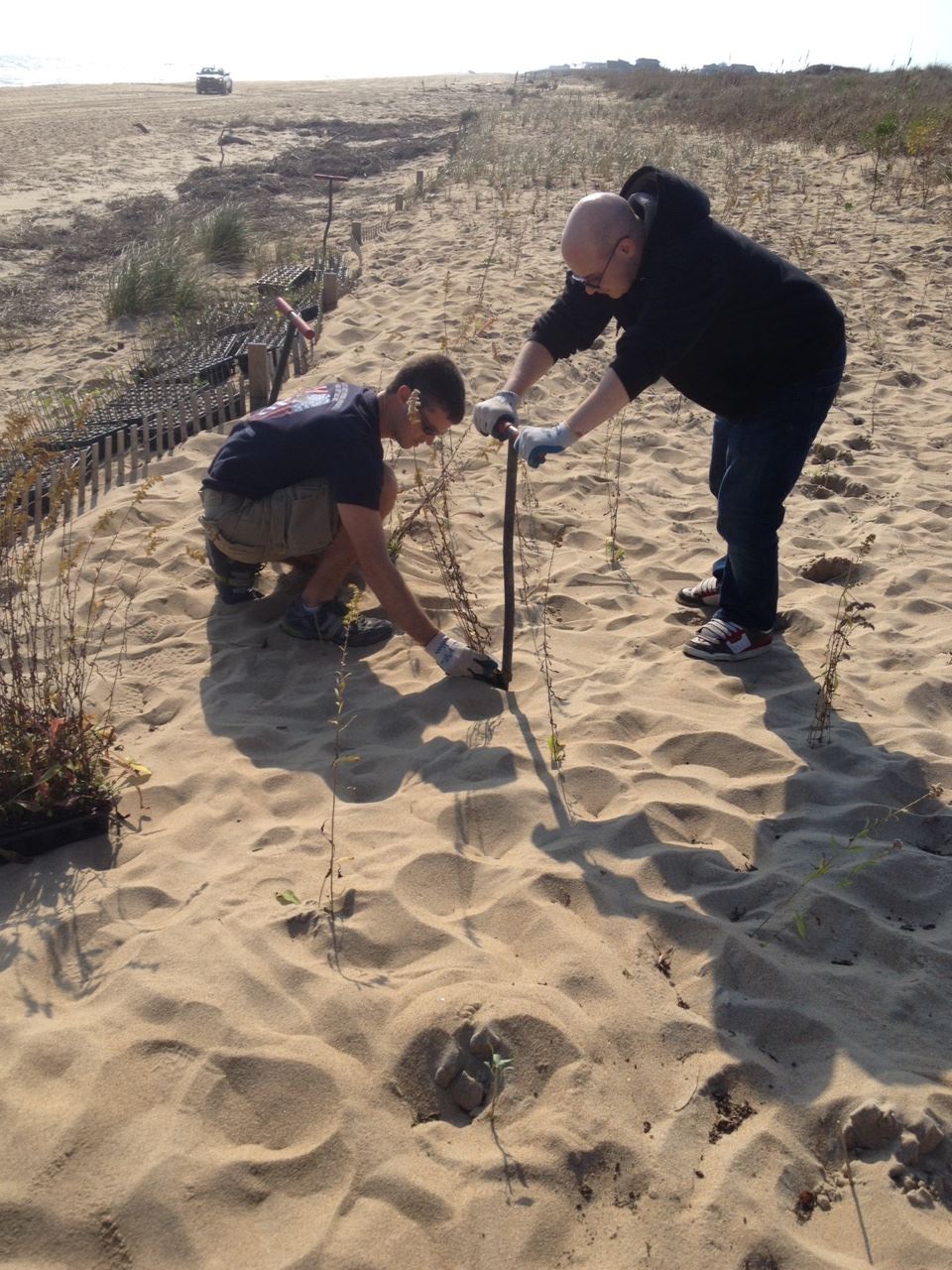 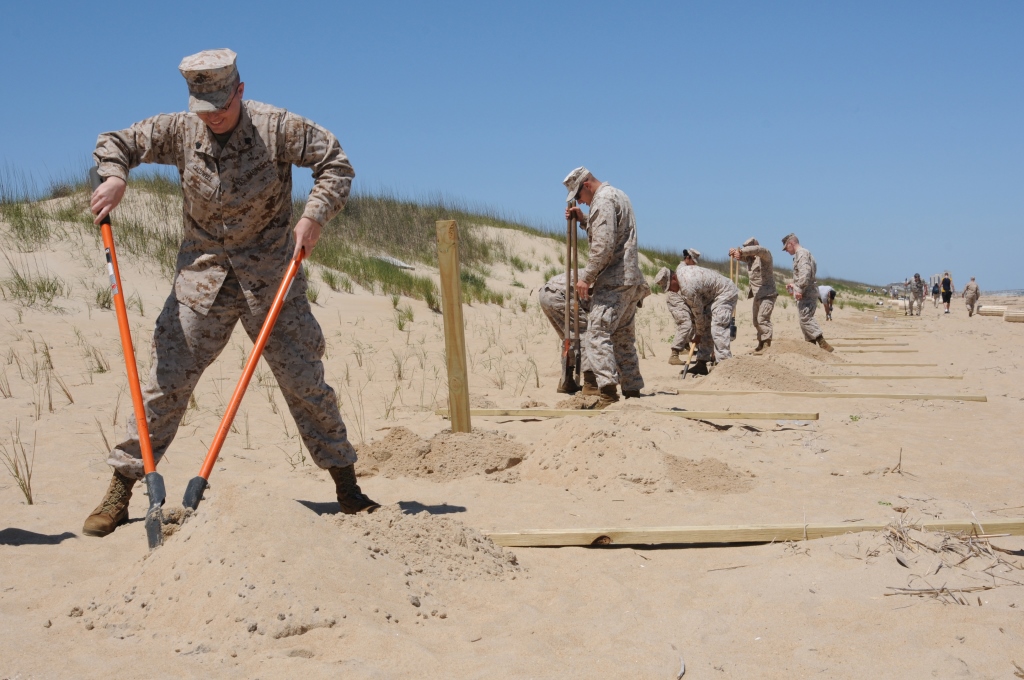 The Aquarium, with funding from the DoN, hosted a community planting and fence installation event, where 112 volunteers dedicated 672 hours from October 25, 2018 to October 28, 2018.  Volunteers planted 35,825 native grasses along barren sand drifts on the frontal portion of primary dunes. Grasses (2″ plugs) were planted at approximately 18″ spacing.  One-gallon native shrubs (quantity= 2,031) were primarily placed in the swale between the primary and secondary dune structures to provide further stability and to add diversity to the dune habitat. Approximately 10% of the shrubs were placed along the frontal primary dune. All shrubs were planted in clusters of either three or five.

Vegetation stretched 6.69-acres of DNA coastal dunes. In compliance with Virginia state regulation, no fertilizer was used when planting.

Dune fencing was installed in parallel fashion, approximately two meters from the toe, or base, of the primary dune. Previously installed fencing can be seen along the toe of the dune, displaying various degrees of burial, due to sand shifting and accumulation. Fencing was installed using 2’x 4’x 8′ treated posts placed 4′ into the ground at 8′ spacing down the shoreline. An auger was used to create a hole for each post ensuring we reached the desired depth. Wooden sand fencing (4’x 50′) was then secured to the posts using galvanized wire at three points. 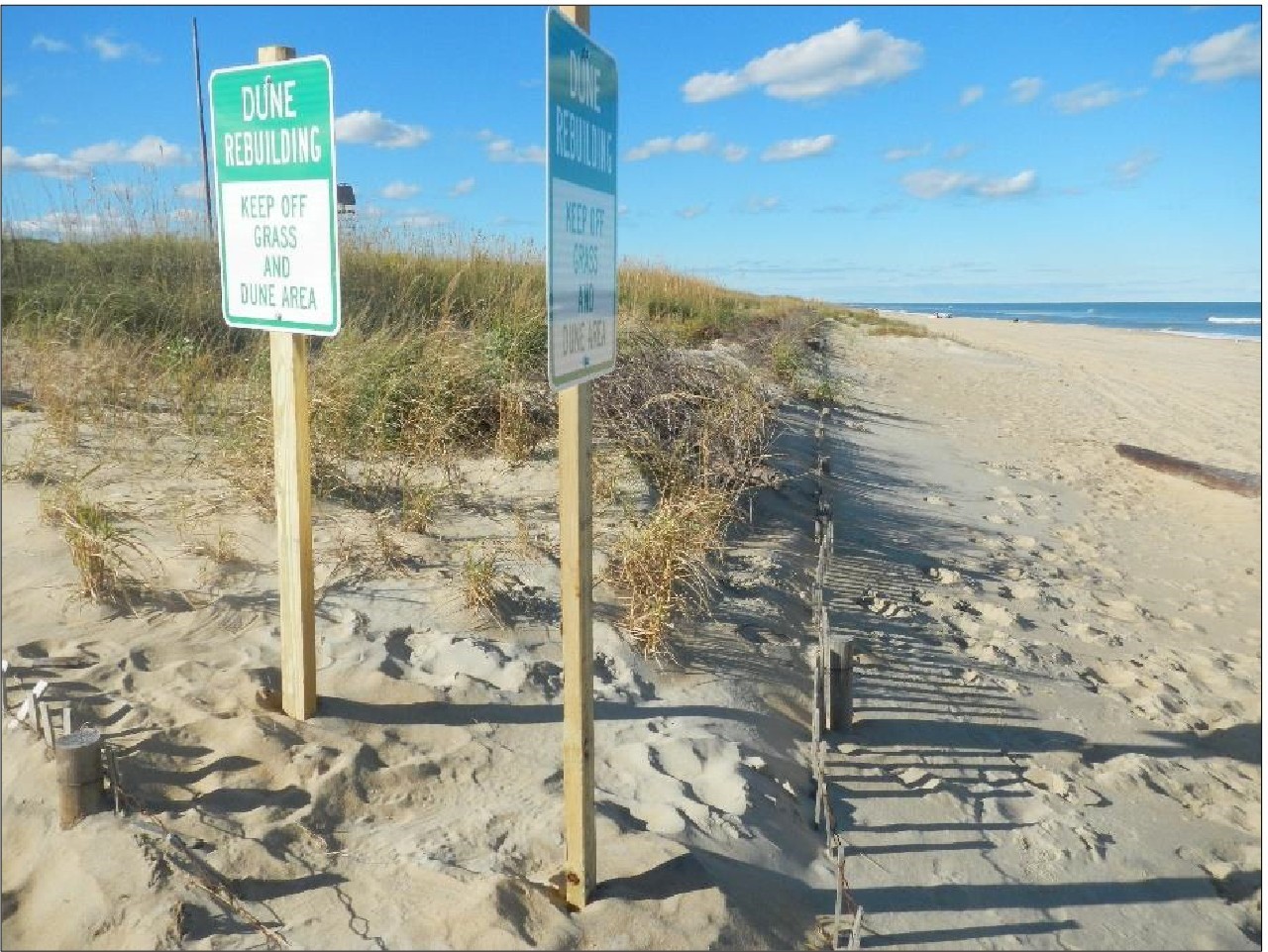 The DNA Sifting Sand dunes are dynamic and complex.While the Aquarium depends on the Natural Resources Manager (on-site staff) to report damage from major storm events, the cooperative agreement potentially outlines funding through 2022, which would allow Aquarium staff to perform site visits and monitor the recently planted dune. 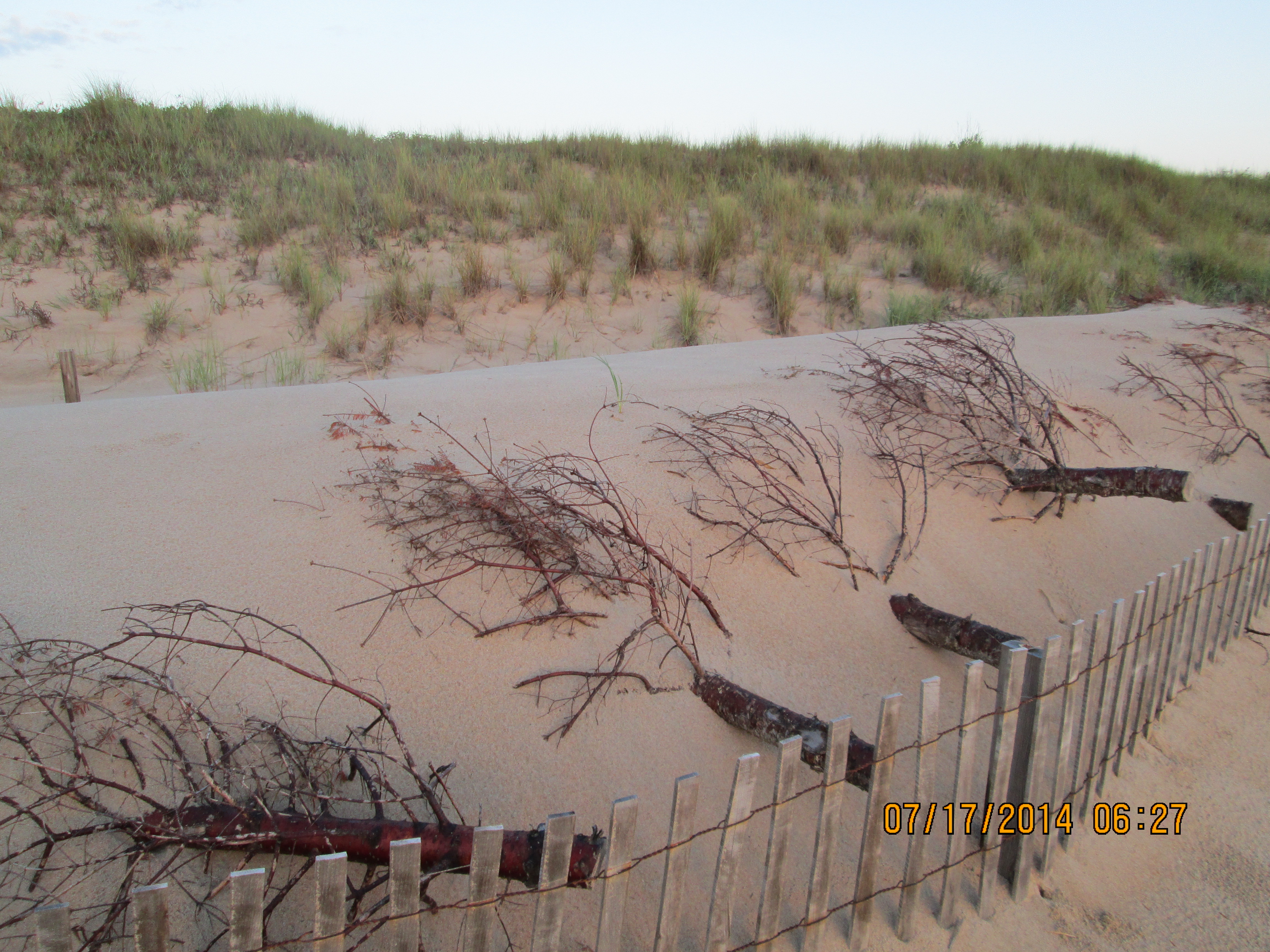 At the conclusion of the 2018 planting event, Aquarium staff installed 18 habitat restoration signs along beach access points and documented six photo stations. These photo stations will aide in monitoring of the site. The Aquarium returned to the site April 11-12, 2019, to install additional dune fencing. During this visit, they collected information on plant survival and acquired updated images for the designated photo stations. While general community volunteers were not recruited as part of this fencing effort due to the increased level of physical labor required, the Aquarium secured assistance from the Virginia Service Conservation Corps local Virginia Beach chapter and the DoD provided support from Active Duty U.S. Navy and Marine Corps personnel and Navy Civilian personnel.

Partners working with the National Aquarium and contributing to the success of this project include the Department of Navy, Virginia Aquarium & Marine Science Center, and the National Environmental Education Foundation, who provided funding for additional plants.

The National Aquarium and the Department of the Navy have been partners in the Chesapeake Watershed Cooperative Ecosystems Studies Unit since 2001. 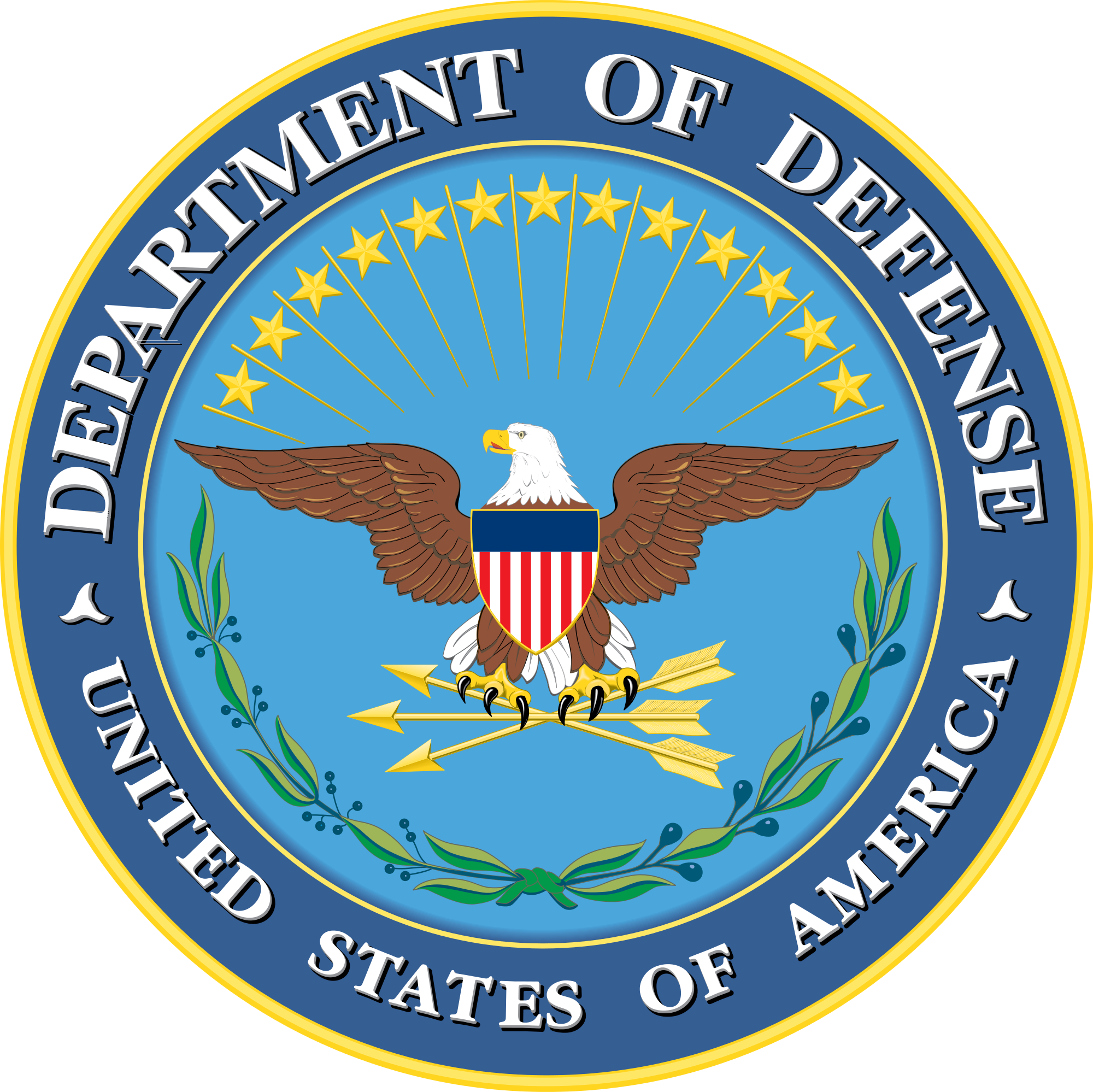