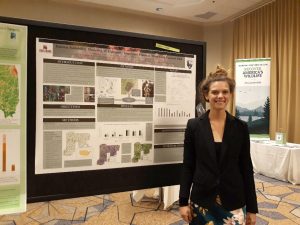 The following CHWA CESU  project exemplifies a larger effort within the National Park Service to work on plant gathering agreements.

The project was funded by the National Park Service via the Chesapeake Watershed CESU.

The project aims to increase collaborations between the National Park Service and the Rosebud Tribe. The project evaluated the distributions and abundances of culturally important plants at Wind Cave National Park to assist in potential permitting to sustainabily gather plant parts. Graduate student Elizabeth Green said, “I was grateful to be part of the assessment process and to experience the beauty of the Black Hills along the way.” The project focused on knowledge and collaboration of available tribe members and experienced ethnobotanists, which has given this project a novel touch. 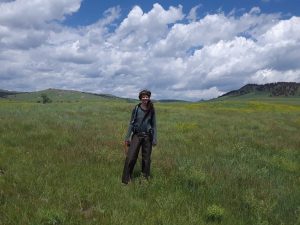 In 2016 the National Park Service (NPS) modified the Code of Federal Regulations (36 CFR § 2.6) to open opportunities for special use permitting for plant gathering from national parks. From 2017-2020, as part of the NPS efforts to facilitate the adoption of plant gathering agreements, we interviewed 40 Lakota members affiliated with the Rosebud Tribe to explore interest in gathering plants at Wind Cave National Park, which is a vital cultural landscape for the Lakota. Tribe members expressed interest in reconnecting with the landscape, strengthening food sovereignty by accessing a wider variety and quantity of edible plants, and gaining access to medicinal plants that have special value because of the Wind Cave landscape. Plant gathering agreements offer much-needed opportunities for collaboration with tribal entities and incorporation of traditional ecological knowledge into applied practices in the NPS.

This action legitimized more informal tribe and National Park agreements and opened opportunities for Special Use Permitting for plant gathering from additional National Parks. Four years after the modification of the code, a handful of agreements have been formalized including traditional harvesting of: saguaro (Carnegiea gigantea) fruits and cholla (Cylindropuntia) buds by the Tohono O’odham Nation and sochan (Rudbeckia laciniata) by the Eastern Band of the Cherokee Nation in North Carolina. These agreements offer opportunities for co-management and incorporation of traditional ecological knowledge into applied practices.

The Plant Gathering Rule outlines the process for developing an agreement between NPS and an interested tribe. Part of that process is performing an Environmental Assessment (EA) to identify what species might be of interest and value to the local tribe and which plants can be sustainably collected. The EA must result in a Finding of No Significant Impact (FONSI) for the plant gathering activity (36 CFR 2.6 2016). This involves working with tribal members to provide necessary details as to indigenous plant gathering and management practices. 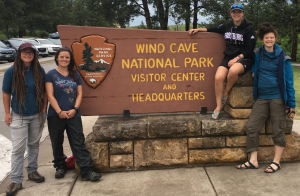 In 2019 the Eastern Band of Cherokee Indians and NPS signed a Plant Gathering Agreement for collecting sochan (Rudbeckia laciniata, L.) within Great Smoky Mountains National Park (NPS/EBCI 2019). Saguaro National Park in Arizona and the Tohono O’odham Nation have completed an environmental assessment and received a FONSI for collection of saguaro cactus (Carnegiea gigantea, Engelm.) and two cholla cactus species (Cylindropuntia spp. (Engelm.) Kreuzinger) (NPS 2018).  Acadia National Park has been working with the Wabanaki Tribe in coastal Maine to investigate traditional harvesting of the culturally important plant sweetgrass (Hierochloe odorata, L.) (Ellis 2016), which has traditionally been used for basketry (Moerman 2009). Additional EAs are underway with tribes such as the Cherokee Nation with Buffalo River National Park (NPS 2019).

Species Distribution Models, along with other methods such as vulnerability indexing, or quantifying the risks to plant populations by estimating individual risk factors, were used to focus conservation and harvesting efforts. This research aims to provide an empirical framework for indexing culturally important plant species being assessed for risks resulting from harvesting within the boundary of Wind Cave National Park. Standardized NatureServe methodology was modified to produce localized rankings for species vulnerabilities. As expected, plants that are less common and were unlikely to survive harvesting were ranked as more vulnerable such as breadroot scurfpea (Pediomelum esculentum (Pursh) Rydb.) and scarlet globemallow (Sphaeralcea coccinea Nutt.) than common plants such as ceremonial sage (Artemisia ludoviciana Nutt.) and fringed sagewort (Artemisia frigida Willd.) that are more likely to survive harvesting.