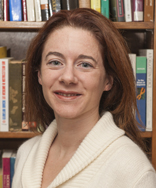 Shannon Kundey is an Associate Professor in the Department of Psychology and Counseling at Hood College. In 2008, she earned a PhD in Experimental Psychology from Kent State University. She is the author of numerous articles on cognition in species ranging from salamanders to geckos to dogs to humans. Her research explores the behavioral processes that give animals (including humans) the ability to organize complex behavior. Her current interests include understanding similarities and differences in cognition in amphibians as well as investigating humans’ learning of patterns. Dr. Kundey is known for her close mentorship of students in research.