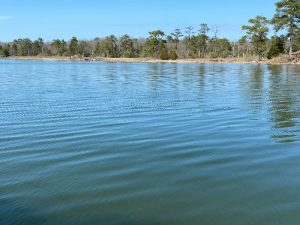 The Lynnhaven River Watershed represents the largest tidal estuary in Virginia Beach, Virginia, and 64 square miles of the southernmost extent of the Chesapeake Bay Watershed.  This watershed includes some of the most important recreational areas in Virginia for fishing, boating, crabbing, bird-watching, and shell fishing.  The Lynnhaven is also one of five designated Tier I tributaries within the Chesapeake Bay slated for native oyster restoration in the coming years.  The Lynnhaven River Basin Ecosystem Restoration Project is a multi-phase aquatic ecosystem restoration project whose main purpose is restoration of reef habitat, wetlands, and Submerged Aquatic Vegetation (SAV).  The Chesapeake Watershed CESU Research Network is excited to announce that the Virginia Institute of Marine Science (VIMS) will be working with the U.S. Army Corps of Engineers to begin Phase 1 of the SAV restoration and monitoring in the Lynnhaven River.

Why restore SAV in this region, and why is VIMS the logical CESU partner to help the Corps in this effort?  Researchers have learned that there has been substantive historic loss of SAV in the Chesapeake Bay and current levels are less than 20% of those historic levels.  Historically, the shorelines of Broad Bay in the Lynnhaven River supported SAV habitat that is no longer present, so it will serve as an excellent test location for this study.  Researchers know that SAV provides important habitat for fish and shellfish species, while also providing some of the most important nursery habitat for the blue crab, a species that is very important to the Chesapeake Bay.  Finally, SAV absorbs excess nutrients and traps sediment, ultimately improving water quality. 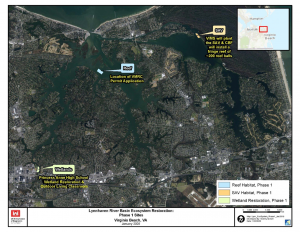 The VIMS is the logical choice for this partnership, and the Corps used the CESU vehicle to access them for a variety of reasons.  VIMS has been monitoring SAV in the Chesapeake Bay and its tidal tributaries since 1984.  In addition, VIMS has specific interests in SAV populations in the lower Chesapeake and has completed extensive research on two species that will be restored with this project – eelgrass and widgeongrass.  The VIMS also monitors the plant status of many SAV beds in the lower bay each year by assessing plant cover at 24 transects.  The VIMS has also worked with other partners in the past, including the Virginia Department of Environmental Quality and the Environmental Protection Agency’s Chesapeake Bay Program, to first develop water quality criteria related to SAV growth (and target restoration standards) for this region.  Finally, VIMS has perfected a storage technique for eelgrass seeds that will be harvested in the early phases of this project and ultimately re-planted in later phases.

This project will include an extensive ground survey of the entire Broad Bay region, collecting and storage of seeds of both eelgrass and widgeongrass during the period of peak seed release and then releasing that seed during natural seed germination periods, monitoring of the replanted species, and constant monitoring of water quality to gauge the effectiveness of the work.  The data gathered from this project will ultimately help the Corps assess when the area can be re-constituted as a habitat with natural oyster beds.  Faculty and graduate students from VIMS will directly involved in each phase of the project.

The partnerships included in this project serve as an example of the positive impacts the CESU Research Network can make.  The research and data that is produced in this effort will help the Corps make more informed, data-driven decisions as they continue their SAV and oyster restoration work across the country, while VIMS is able to engage graduate students in their pursuit to advance the science.  Alicia Logalbo, Chief of the Environmental Analysis Section of the Norfolk District of the U.S. Army Corps of Engineers believes this project can serve as a model for future restoration efforts in the Lynnhaven River and Corps efforts around the country.

To learn more about this project you can contact either Danny Filer or Alicia Logalbo.