Since the late 20th century, SAV in the Chesapeake Bay watershed has declined due to a combination of reduced water quality and extreme weather events, such as hurricanes. Two recently funded US Army Corps of Engineers (USACE) and National Park Service (NPS) projects, both  facilitated through the Chesapeake Watershed Cooperative Ecosystem Studies Unit (CESU), seek to restore native SAV to portions of the Anacostia and Potomac Rivers near Washington DC through two approaches. 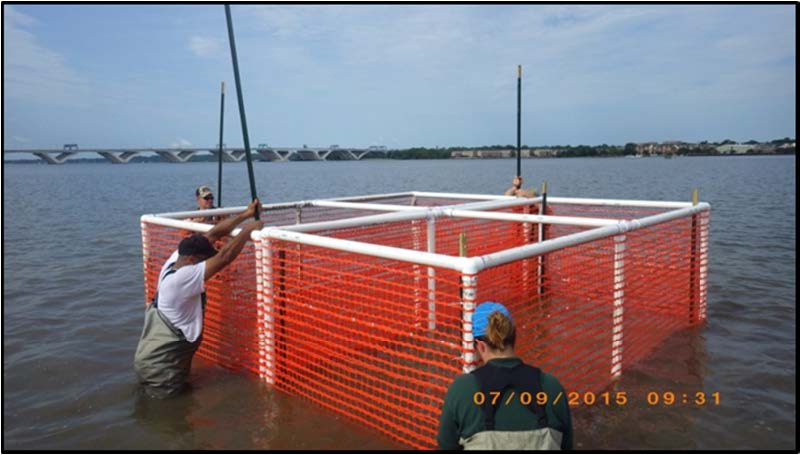 One project led by Shellie Spencer and Daniel Ryan of the Washington DC Department of Energy and Environment (DOEE) will transplant native wild celery plants (Vallisneria americana) from existing beds in the watershed to new identified sites in the Anacostia and Potomac Rivers and enclose them in special protective structures designed by DOEE biologists. The enclosures (pictured to the right), constructed of PVC pipes and snow netting, have proven effective in over several years in preventing fish and birds from uprooting the plants in other smaller SAV beds planted by the team. Under the newly funded project, DOEE will expand their use of these enclosures to create a perimeter around a larger SAV bed, which will then serve as a seedbed should another extreme weather event impact the region.

“This project enables us to move from working in square feet to square acres,” said Ryan. “To create a sustainable, returning SAV bed within that perimeter will be a success. To have it thriving to the point that we can transplant to other areas after an extreme weather event would be our highest goal.”

The second project, led by Dr. Katia Engelhardt of the Appalachian Laboratory of the University of Maryland Center for Environmental Science (UMCES), will establish beds of Vallisneria americana from turions, or buds, harvested from cloned plants.  Over the last few years, Engelhardt and her collaborators have collected plant samples throughout the Chesapeake Watershed, from the Sassafras River on the Delmarva Peninsula to the Mattaponi River in Virginia and along the Potomac River. The collected plant samples were then genotyped, or examined for differences in their DNA, and cultivated in a greenhouse at the Appalachian Laboratory, producing cloned plants genetically identical to those originally collected.

As part of the new project, Engelhardt and her students will plant the turions and seeds from 23 cloned plants representing 18 different genotypes from Piscataway Park located just south of the Anacostia River and along the Potomac River. Turions will be planted in biodegradable bags anchored with flexible snowpoles. Bird scare tape attached to wiring will surround the snowpoles to protect the plants from waterfowl.

“The DOEE and UMCES projects complement each other,” said Engelhardt.  “DOEE was instrumental in helping me identify the sites for my study in the Anacostia and Oxon Cove, while I’m offering DOEE plants from our greenhouse for their study.”

Performing these two projects in the same rivers at the same time will allow scientists and resource managers to compare results and identify which method works the best, providing much-needed data in a field with very limited published research available to guide management.

“Both of these projects, happening simultaneously while sharing resources and results from their cooperative research, exemplify the true mission of the CESU Network,” said Dan Filer, Coordinator of the Chesapeake Watershed CESU Research Network.  “The joint efforts of the NPS and the USACE also demonstrates good resource stewardship and landscape-level resource management that is becoming more the trend in today’s federal resource management.”

The scientists involved believe the time is right for these projects. Because water quality has improved in recent years, native plants can now return with a greater chance of thriving. Additionally, the projects complement other current initiatives designed to improve water quality and to restore mussels to the area.

Both projects follow 5-year timelines that include planting and monitoring of beds in each year with results shared in annual progress reports. Initial planting for both projects will begin early in the summer of 2022.